A few weeks ago, I picked up a BTECH UV-2501+220 from Baofeng Tech.  After pulling it out of the box, my first thought was "wow, his thing is tiny!" but this little transceiver performs like a champ!   I was really excited to start using the 2501+22, as this is my first true mobile rig.  I've been using a Baofeng UV-82HP (see my review here) with a Tram 1185 mag mount in my car, so stepping up to this mobile rig was quite exciting! 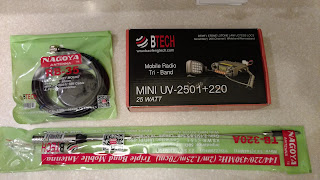 Because the Tram 1185 antenna is only a dual band, I opted for the NAGOYA TB-320A tri-band antenna, along with the NMO MOUNT MAGNET PL-259 combo from Baofeng Tech (Both listed under "Mobile Radio Accessories") to have the ability to use the 1.25 meter band (220 MHz). 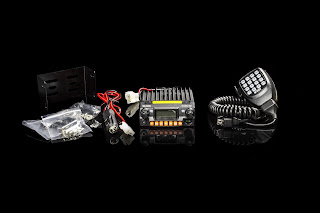 The UV2501+220 is definitely a big upgrade for me, coming from an HT.  Having 200 memory channels for starters is really nice, giving me the ability to program in repeaters all the areas I travel to, and still have room for monitoring channels (no transmit), such as local first responders.  Of course, having the 1.25 meter band, this adds to the number of repeaters as well.  I am fortunate that there are two active 220 repeaters in my area!   I am also able to hit repeaters I was unable to with the HT, and I'm chalking this up to two things: One, the larger Nagoya TB-320A antenna from Baofeng Tech, and two, more power.  The power listed in the specifications are:


So as usual when new toys arrive, I wanted to get up and running as soon as possible, and with the UV-2501+220 this was really easy to do with the included cigarette power cable.  Putting the NMO mag mount on the car (which came with a NMO-PL-239 adapter), screwing in the TB-320A antenna, running the cable into the car via the trunk lid and connected it to the PL-239 in the back of the radio took all of 5 minutes, and I was quickly calling on 146.52!  Because of it's size, I really expected it to heat up, but I've yet to have the built in fan kick on  It seems to be performing very efficiently. 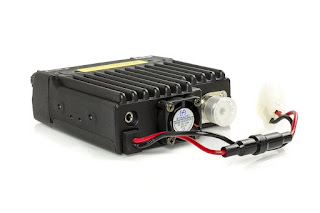 The hand mic fits nicely in the hand, and has a very nice "click" when keying the PTT.  The buttons are easy to push, and makes it very easy to navigate menus, frequencies and channels.  I think my favorite is scanning.  It is really fast, and can be started/stopped right from the hand mic.   Changing channels with the mic doesn't even take my eyes off the road, especially with the (optional) voice turned on. 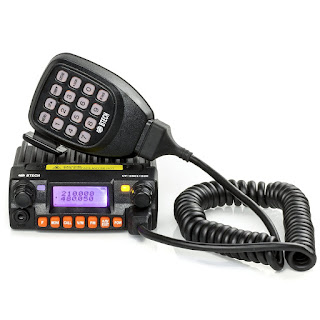 I have not decided where/how to mount the radio yet.  I lease a vehicle, so permanent mounting poses an issue.  I will probably end up getting something that can mount in the cup holder (like a cell phone holder) and doing a little modding to have it hold the mounting bracket.  We'll see.  For now, It actually fits nicely between the center console and the passenger seat,

The sounds from the speaker is very loud, and extremely clear - which actually surprised me a little!  I didn't think that so much sound and clarity would come from such a little speaker!  I did notice a small noise issue when scanning, but confirmed that it was only when I scanned from 2m to 220.  A small "click" can be heard when the radio switches from/to the 220 band.

Manual programing of the radio is fairly simple, especially if you are used to doing so on any other Bofeng HT.   Baofeng Tech has posted a really great video, showing how simple it is to program manually.

Obviously, if you have a choice of programing, doing it via a computer is MUCH easier!  When I first got the radio, it only had the factory "VIP" software available for programing it, and it is not the greatest in the world, but was easier than doing it manually.  Baofeng Tech has another great video showing how to program channels in with the stock software.


Since then however, the great folks that write and support CHIRP has provided support for the UV2501+220 in their daily builds thank goodness! 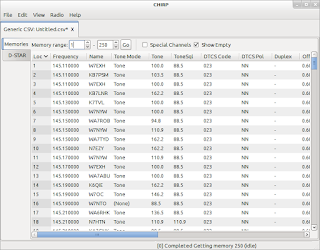 Regardless of the software you use, you'll need a programing cable.  Don't skimp here.  Get it from Baofeng Tech so you know you are getting a real FTDI chip - not a counterfeit from a multitude of other venders that sell them.  Get it here: USB Programming Cable for BTECH Mobile Radios 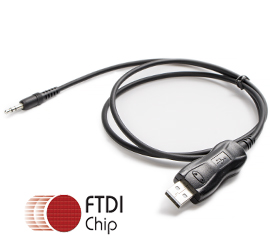 Once I was all programed up, I was quickly on the local repeaters.  I was so clear, several of my "regulars" that I spoke to even noticed that I was on a new rig.  I was glad to brag about being on a "cheap chinese radio" something that some tend to look down on.  I look at it like this:  If it were not for inexpensive Amateur Radio equipment, I would not be in the hobby!  I appreciate Baofeng Tech for supporting the Ham community, and allowing many to get into a hobby that otherwise can be rather expensive.

While there are other "cheap" alternatives out there, none that I'm aware of have the backing nor warranty of a US distributer that Baofeng Tech provides.  Speaking of support, the user manual is GREAT!  I keep a PDF of it on my cell phone and tablet, so it's easy to reference on the go - in case I can't remember how to do a manual programing, or need to change a setting.

Another PDF that BTECH recently posted on their site is how to use two of the UV 2501+220 radios in a cross-band repeater setup.  This looks like a really good project!  I try to keep an eye on their website (https://baofengtech.com/uv-2501+220) under the "Software and Owners Manual" button, as they seem to keep adding more documentation all the time.

As with any Baofeng (and a multitude of other products) Miklor's website is the home of a plethora of information that is well worth your time checking out.

All in all, this radio is my favorite radio now!  I highly recommend it to any Amateur Radio operator, both new and old.  It's an inexpensive transceiver that can go just about anywhere, and performs like one of the "big boys" at a price that most can afford!  I'm looking forward to many years of service with the UV 5201+220 Transceiver.

I love Jesus Christ, and also enjoy coding, Mac/PC software/hardware, Photography (Visit: https://dandbforever.photography), Ham Radio, firearms, and pretty much anything else that is techy.
I post things that interest me, and if you're here, it probably interests you too!

There was a blog refresh in 2014, and this is a a link to all the archived posts from the old blog. ARCHIVE